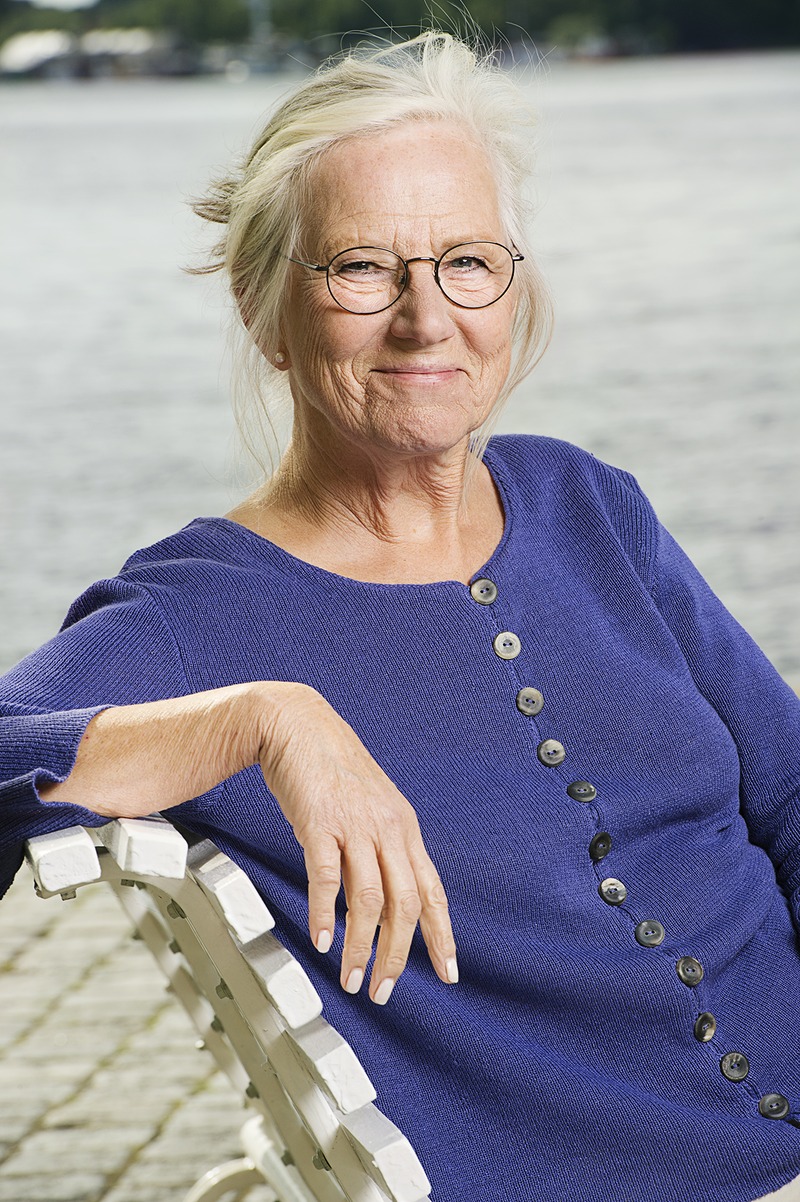 When I was a child I was totally convinced I would grow up to be a farmer’s wife. I spent my summers at grandma’s place, where they kept cows, and wrote countless letters. Writing and cows – aren’t the events that shape our lives curious?
I became an author; a life without writing would have been difficult. I didn’t get any cows; I had to create one. Jujja Wieslander is no celebrity, but Mamma Mu has become one. Now both she and Crow have to accept a subordinate role under my name on my website.

This is because Jujja is more than just Mamma Mu. I am equally fond of Day Ghost, Junior and Billan and the Giraffe with the short neck. They came into being during the years I lived and worked with Tomas Wieslander. He passed away in 1996. Those were the years in which we also wrote all the songs. Together with talented musicians Anders Ågren, Backa Hans Eriksson and Staffan Wiklander, we toyed around in our own studio and produced records that are still played in homes with young children and at preschools.

I am fascinated by things that grow. That’s how I normally present myself. And by that I mean the actual dynamic growing that children, relationships and plant-life itself always display. I live in the countryside, and nature and gardens make up a central part of my life.

A cornerstone of my creativity is – and has always been – closeness to children as they grow and play. My own children and grandchildren outgrew their youthful ways in the blink of an eye. But my own growing process seems to have stalled. For me, young children with their quirky sense of humour, their seriousness, their good-natured curiosity and tremendous capacity for growth are the most interesting things in the world.

After Tomas’ death I continued working with the old characters. I live with newfound love, and new children have been born. Vina Vina, the boy who is both real and pretend, has now featured in five books. Hjördis, the girl who was me, has featured in one book. More are on the way.

“Can’t you write a book about gardening?” my publisher asked when my love of gardens became known. I suppose they expected a children’s book. But instead, the book dealt with thoughts about growing as well as decline, of the consolation in knowing that that which is most ephemeral is the only constant. Late in September (Sent i september) did not turn out to be a children’s book. I was also asked to write about the thoughts behind my children’s books. Play a little (Leka lite grann) is a book about children’s own stories, of how they try to understand us and the world through playing make believe. But it’s also about the importance of having access to a language so they can express their thoughts and feelings.