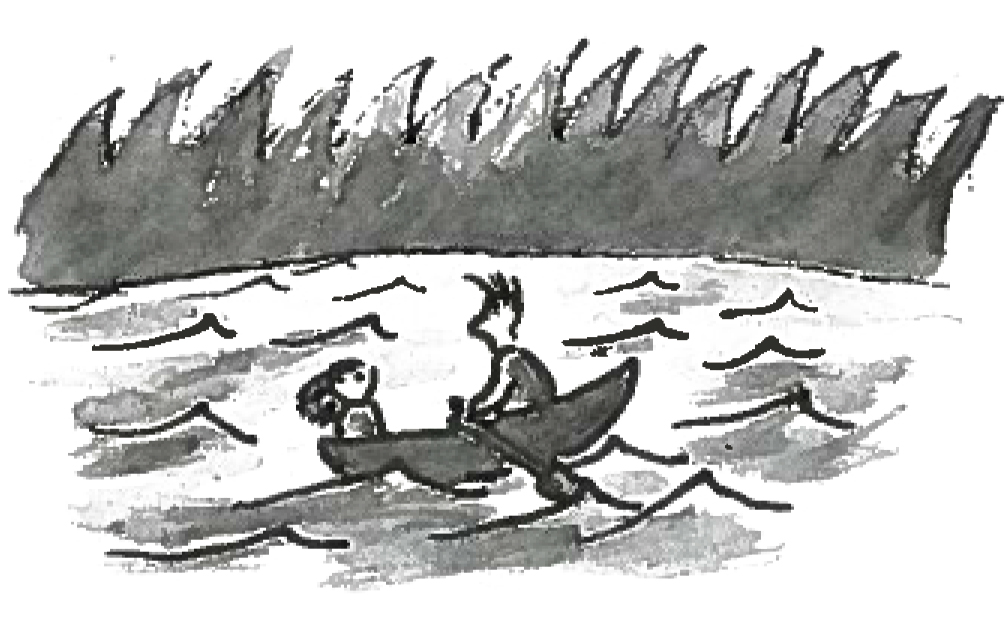 Someone kind once said to me, “You’ve written a song for every imaginable moment in a child’s life”. It’s really wonderful to get that sort of recognition for work you’ve done. And it might also be true. The secret behind it, of course, is that we spent many years in close contact with children and were completely focused on gathering all those forms of expression. Some of the songs on the first two records My Little Crow Song and Mamma Mu – songs for the entire body – show what can come from listening to young children: Clap your hands as fast as you can, Sway to the beat, March-along song, Little bikes, Small legs kicking, Tippy-toeing, Stumbling on, Consolation prize, If it starts raining, Pretending I’m a tree, I’m bleeding, Somersault, Time to run, Awake at night.

There were times when it was hard to keep up. When our own children outgrew us, we eavesdropped on other people’s children with a complete lack of inhibition. We were given permission to leave a tape recorder in playrooms and on breakfast tables of friends and acquaintances, and over time we accumulated over one hundred hours of material on tape.
It was when we listened to those tapes, when we ourselves weren’t busy buttoning buttons, that we could hear all the poetic expressions the children used. We also noticed just how much children sing when they play. Small, short catchy phrases or endlessly long, meditative songs for play. 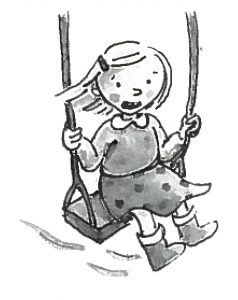 I can still clearly remember my son’s monotonous but dramatic songs, accompanied by the significant clatter coming from the box of Lego toys. There was one in particular that went: “I’m sailing away from maaaaaamma!” in a tempo reminiscent of a sailor’s waltz. I also remember young Kristin’s delicate song to her paper-doll, which was dancing wraithlike on its cut-out paper legs, “I dance and dance a little while, until I lie down and fall asleep”, upon which the doll went to sleep only to be abruptly and firmly woken up to, “Then I get up and continue to dance, dance the dance, dance dance dance!”

We tried to find a publisher for the songs early on, but were turned down by the established music publishers and record companies. So we built our own studio and released the records on our own.

The songs were created from listening directly to children at play, and we wanted the orchestration to be playful and express the essence of the song in the same way. If it was a lullaby, the instruments should snore, if a child was playing at being an owl in the hollow of a tree, the whole song should hoot and if the song was called “Bang Bang Balance” you should feel the child’s concentration. 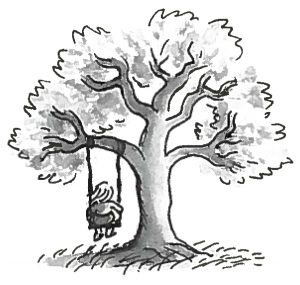 We looked for musicians who could take part and play, and we found them – both musicians and technicians. Backa Hans Eriksson, Anders Ågren and Staffan Wiklander worked with us for many years and helped make that which was played at, listened to and sung along into recorded music. Our studio became a children’s playhouse; working was a party.

Our first four records were released on vinyl. Starting with the fifth – and last – record, we changed to cassette tapes. A lot of children had easy-to-use cassette players, the music truly became part of the children’s lives. Then came CDs, which were soon replaced by streamed music. A lot of other musicians have recorded our songs and they are represented in numerous anthologies. Even so, it’s the original productions that are the most played and listened to. 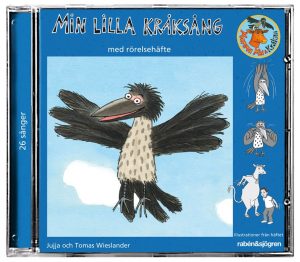 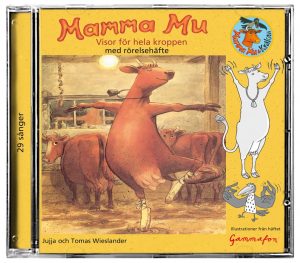 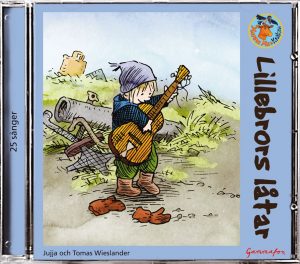 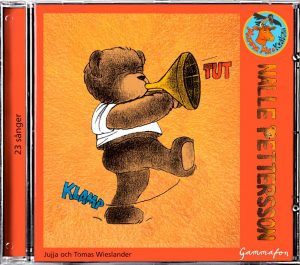 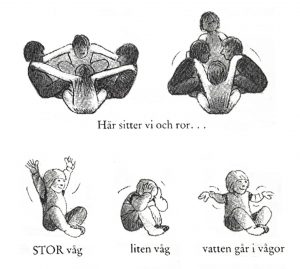 A person who does not yet have a language still has a need to be able to express themselves and communicate, just like everyone else. Small children long for language. Light a candle in front of a one-year old and say, “light” and you’ll see a focused attempt to say “liyyttt”. If you can’t speak, you can use your body and hands. Young children love to clap their hands. It’s the simplest and best training to practice coordination of the two halves of the brain, which in turn supports both the body and speech.

We had small children around us when we wrote our songs, and we made up gestures for the youngest so they could take part. “This is how crows clap, completely normal, moose clap with arms THIS big, and mosquitoes are so small they clap a tiny tiny clap right in front of your eyes.” It’s fun and natural to do both large and small gestures. We made a booklet that showed how to do the different gestures. These kinds of brochures have disappeared in this age of streaming, but I hope to publish a live version of them in the future for YouTube.