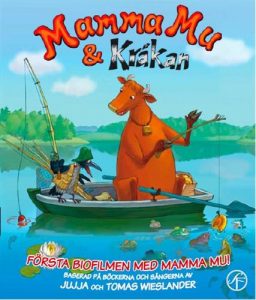 An animated film, Mamma Mu and Crow, was released in 2008. It was also aired as a TV series.

It was drawn and animated, based on Sven Nordqvist’s illustrations, at Studio Beastarts in Budapest. Elena Rugova was the art director and Igor Veyshtagin directed. I wrote the manuscript, Niklas Fransson and Ulf Turesson adapted our songs to film music. Rachel Molin and Johan Ulvesson did Mamma Mu’s and Crow’s voices. Svensk Filmindustri and Johanna Bergenstråle were the producers.